​4.  An Unincorporated Separation Agreement is not modifiable unless the parties agree.

2.  The timing of executing a separation agreement is important.

However, and understandably, parties are sometimes hesitant to separate and establish a new residence without first negotiating and executing an agreement outlining the terms of the separation.  In other situations, a party may be financially unable to move out without the assurances agreed to in a separation agreement (i.e., a scenario where one party agrees to leave but needs the agreed upon alimony, child support, or share of assets to be able to afford a new place to live), in which case, it may be a leap of faith to move out under the verbal agreement that the separation agreement will be signed after the move.  In situations in which there is no alternative to executing the agreement while the parties are still living together, we recommend that parties pick a move out date within no more than a week or so of the date of separation, specify the move out date in the agreement, and follow through with the move out. 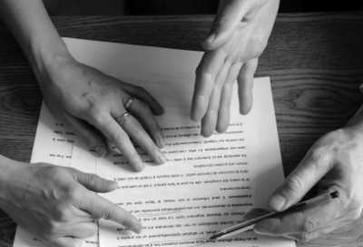 ​10.  REconciliation of the parties can have a major impact on a separation agreement

One of the main public policies behind creating a separation agreement is to help separating couples resolve issues arising from their marriage.  Further, part of the essential consideration in a separation agreement is the actual separation of the parties, which if not present, voids the agreement. Reconciliation occurs when there is a resumption of marital relations between separated parties.  NCGS 52-10.2 defines a resumption of marital relation as the “voluntary renewal of the husband and wife relationship, as shown by the totality of the circumstances.”  When parties reconcile, each provision may be impacted differently as to whether it becomes void or remains enforceable.  NC law surrounding the impact of reconciliation on a separation agreement is complex, and the impact can be substantial.  As a simple example, and specifically in reference to spousal support/alimony, executory provisions related to spousal support in a separation agreement are voided by reconciliation.  Executory provisions are those in which a party is bound by the agreement to do or not do something in the future.  Therefore, if parties agree to X amount of alimony to be paid for ten years, and then reconcile one year after the separation agreement is signed, the payor would no longer be responsible for paying the final nine years of alimony, but would not be able to re-coup the one year already paid (and may also be held responsible for any missed payments during the one-year period).

​5.  sometimes it makes sense to include certain settlement terms in a separation agreement while placing other terms in a consent order.

Given the differences in the way contracts (a non-incorporated separation agreement) and court orders are enforced and modified, sometimes it makes more sense to split up the terms of an agreement into a separation agreement and a consent order rather than putting all settlement terms into a separation agreement.  The implications of each provision in a separation agreement vs. a court order may be profound and it's important to consult with a divorce lawyer to understand the nuances in the law.  For example, alimony is not modifiable when included as part of a private contract (separation agreement), unless the parties involved agree to change the document through an amendment or new separation agreement...both of which would require the notarized signatures of each party.  However, when alimony terms are included in a court order, the terms may be modifiable by a court upon a showing of a substantial change in circumstances.  As another example, terms related to child custody in an un-incorporated separation agreement (a private contract) may be changed by a court if either parties files a child custody complaint, at which point the court would be charged with making a custody determination based on the best interests of the minor child involved.  However, when a party attempts to modify a consent order (an actual court order), the court must first find that a "substantial change in circumstances impact the welfare of the minor child" has occurred prior to ruling on the best interests of the child...an important hurdle to consider when drafting agreements.

​7.  You cannot force your spouse to sign a separation agreement.

Call today to speak with a Charlotte divorce attorney regarding your legal matter OR click below to visit for other contact options.

"10 Things to Know About Separation Agreement in North Carolina"

*****The following blog includes broad overviews of complex legal topics, should not be relied on as legal advice, and is not meant to be a comprehensive overview of separation agreements.  When drafting a separation agreement, it is important to consult with competent legal counsel. Prism Family Law Firm is available to help in relation to separation agreements in the greater Charlotte, NC area, including Mecklenburg and Cabarrus counties.

When married couples separate, there a number of loose ends that may need to be tied in preparation for dissolving the marriage.  The main issues typically revolve around property division, spousal support and alimony, child custody, and child support.  A separation agreement provides spouses with a reasonably efficient means of resolving outstanding issues from both an economical and stress level perspective.  The costs of litigation can be profound, given the amount of legal work required to navigate through procedural requirements and preparation for trial.  Litigation by nature is also a very contentious process, which can drive a wedge further between the spouses involved.

If parties are unable to agree on all or some of the major issues associated with divorce, litigation may be necessary.  Spouses may also choose to reserve litigation for just a few highly contentious areas, and resolve everything else amicably through agreement.  In other words, a separation agreement may be used to resolve all, or just some, of the outstanding issues between divorcing couples.

​8.  You do not have formal discovery power when negotiating a separation agreement.

Formal discovery includes information gathering tools such as depositions, subpoenas, interrogatories, and requests for production of documents.  Formal discovery rights arise with the opening of a lawsuit, and can be helpful when trying to force a party to provide information.  However, many parties hoping to resolve matters amicably and without court involvement use a separation agreement to avoid court involvement and litigation.  As such, formal discovery is not available as a resource during the negotiation of a separation agreement to search for and verify assets, etc…unless there is also pending lawsuit allowing for such discovery.

Informal discovery, in which each party asks the other party for information regarding bank accounts, assets, liabilities, etc..is common during the negotiation of a separation agreement.  If a party is not willing to cooperate with informal discovery, then it may make sense for the requesting party to file suit to obtain discovery power to assist with further investigation.

​Questions?   Our divorce lawyer serves clients in Charlotte, Huntersville, Mathews, Mint Hill, Concord, Mooresville, Davidson, and Harrisburg in Mecklenburg and Cabarrus counties, and is well versed on the laws and procedures involved in a wide range of divorce related matters.  Prism Family Law Firm can help with drafting, negotiating, and/or reviewing your separation agreement.  Our divorce lawyer will push for an amicable resolution if possible in your situation, but can also help guide you through the court process and litigate any claims for which you are unable to reach an amicable resolution.  Contact Prism Family Law Firm at 704-412-1442 to speak with an attorney.

​3.  Whether or not to incorporate the agreement into a divorce decree is an important decision.

​6.  A Separation agreement is a good idea even if there are no outstanding issues between the parties.

First, verbal agreements are not enforceable.  Therefore, parties run the risk that the other side may not hold up his or her end of the bargain by not memorializing the terms of an agreement into an enforceable written contract.  Second, there are a number of issues that a separation agreement resolves besides the major claims associated with divorce (property division, spousal support/alimony, child custody, and child support) that most people think about.

Despite separating, parties are considered married until officially divorced, and therefore the marital rights of each party remain intact until divorce, until formally waived or released in a document such as a separation agreement, or until severed as a result of a court order such as a divorce from bed and board.  As an example, and simply from an estate planning perspective, in the event that one spouse dies during a period of separation and such rights have not been waived, released, or severed, the surviving spouse would still have the rights: to an intestate share of the deceased spouse’s estate (if no will is in place); to take under the will if there is a will; to take an elective share; to take a year’s allowance in the deceased spouse’s personal property; and to administer the deceased spouse’s estate, amongst other things.

It is important to understand the full extent of marital rights that separated parties continue to enjoy and the potential risks of leaving those rights intact until divorce.

​9.  There are a number of defenses to the enforcement of a separation agreement.

Potential defenses to the enforcement of a separation agreement, which could result in the entire document or specific provisions being invalidated or voided, include but are not limited to the following: when public policy issues are at play, such as when couples execute a separation agreement while still living together and without immediately separating; mental incompetency of a party; purposeful non-disclosure of assets; fraud, duress, and undue influence (for example, when one spouse forces the other spouse to sign an agreement under the threat of revealing damaging information); mutual mistakes of material fact; and unconscionability, which may be procedural (e.g., fraud during negotiations) or substantive (e.g., grossly unfair terms).

"How is the Marital Home Handled in NC Separation and Divorce Cases?"