Want more on child custody?  View and follow Prism Family Law Firm's social media platforms.  We regularly post articles and blogs related to all aspects of family law, including the legal and non-legal side of things.

Or view a list of the blogs Prism's family lawyer has written on child custody and other family law topics.

Paternity is typically established by either operation of law, or by affidavit.  There are several steps that may need to be taken to establish paternity depending on the surrounding circumstances .  Read More...

To speak with a Charlotte child custody attorney regarding your specific situation, call at 704-412-1442.

NC Law considers any custody order that was entered in a state other than NC to be a "foreign" order. Prior to enforcing or possibly modifying these out-of-state orders in NC, the order must be registered here.  Read more...

Contempt of a Custody Order

If one party does not abide by the terms of a custody agreement or order, the other party may bring a contempt or show cause action to force compliance.  Read More...

Child support is a completely separate action from child custody, although the two claims are often brought simultaneously.  There are many factors impacting the amount of child support, including the custodial arrangement between the parties. Read More...

Custody arrangements may be issued on a temporary or permanent basis, but are ALWAYS modifiable.  Whether your child custody arrangement is negotiated through a separation agreement, entered as part of a parenting plan, agreed to as part of a consent order, or actually ordered by a judge, the provisions can always be changed in the future.  Either party to a custody arrangement may initiate a modification of custody upon a showing of a substantial change in circumstances that impacts the welfare of the child(ren).  Assuming a case proceeds to trial and that a judge agrees that a substantial change in circumstances has occurred, the judge will then make a decide whether and how to modify the child custody arrangement based on the "best interests of the child" standard.  Our Charlotte Mecklenburg custody lawyer is prepared to help you file, negotiate, and/or litigate your modification claim.

To speak with a Charlotte child custody attorney regarding your specific situation, call 704-412-1442.

The "Best Interest of the Child" Standard

When making a child custody determination, North Carolina courts use the "best interest of the child" standard. This means that the court will consider various factors centered around the child(ren)'s well-being to determine custody issues.  Anything and everything that does and can impact the child(ren) involved may be considered by a judge in making a child custody ruling.  However, the equal protection clause of the US Constitution prevents a judge ​from presuming that one parent should have custody of the child(ren) based the sex of the parent, and the sex of the parties should be irrelevant to a judge when ruling on child custody.

For more on the best interests standard and items a judge may consider when making a custody ruling, view our list of questions to consider in a child custody dispute.

Our Custody lawyer can help:

*Negotiate custody provisions as part of a              separation agreement or consent order.

* File for custody and represent you at trial.

* Register an out of state custody order in NC. 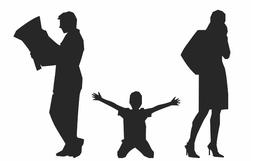 Call today to speak with an attorney regarding your Child Custody matter OR click below to visit Prism's contact page.

​Tips for Parents Dealing with Break-Up and Divorce

Blog: Questions to Consider in a Child Custody Proceeding

Blog: Tug of War with a Fragile Rope

Blog: Enforce and Modify Out-of-State Custody Orders
Blog: Do Dads Have a Chance Against Moms?

Blog: Can I Move Out of State with my Child?

Blog: 5 Common Co-Parenting Issues (and how to avoid)

Blog: Does NC Have Jurisdiction Over My Custody Case?

Blog: The Basics of Supervised Visitation

To speak with a Charlotte child custody attorney regarding your custody situation, call Prism today at 704-412-1442.

Our Charlotte based child custody lawyer is well versed in NC custody law and is able to help with your custody needs in Mecklenburg and Cabarrus Counties.  When ending a relationship, child custody is often the most emotionally charged and difficult topic a couple will face.  The majority of custody disputes are settled out of court between the parties involved and their attorneys, often by using a separation agreement or consent order. Custody arrangements can be as flexible as the parties involved wish, assuming the parties are able to resolve their dispute without litigation.  If the parties involved in the action cannot determine custody on their own, then court involvement may be necessary.

The procedure and steps in a child custody case may vary slightly from county to county, but the NC court system requires all parties involved in a custody lawsuit to complete a parent education class and mediation. If mediation is unsuccessful, the custody dispute will be calendared for trial.  The parties may still negotiate a custody settlement up to the point of trial in the form of a parenting arrangement or consent order.  Our Charlotte custody attorney is prepared to help with all aspects of custody disputes, whether that be negotiating a custody settlement through a separation agreement or consent order, or by filing suit and proceeding towards trial for disputed and more highly contentious custody cases. ​

Thank you for contacting Hunter & Hein, Attorneys at Law, PLLC. One of our attorneys will reach out to you shortly.