​Lost in the legalese sometimes associated with divorce and other family law matters? Our Charlotte family law attorneys have defined a list of 30 terms often used in family law and divorce-related proceedings.  See below for the alphabetical list:

Alimony - payment made by a supporting spouse to a dependent spouse after a marriage has ended to ensure the dependent spouse can maintain the same standard of living post marriage as was enjoyed during the marriage.  In NC, the marital misconduct of the parties may be considered in an Alimony proceeding.  Alimony may be ordered as a period or lump sum payment, and for a specified or indefinite term.  For more, visit the alimony page.

Attorney’s Fees - the fees accrued by a party in retaining an attorney for representation in a legal matter.  Attorney’s fees may be awarded to a party depending on the type of matter and the specific circumstances of the case.

Best Interests Standard - the standard used by NC courts in custody disputes.  The “best interests of the child” standard has become the most prevalent standard used in court rooms across the United States, and allows a judge to consider anything and everything that impacts the well-being of the child involved.  For more, read this blog regarding questions to consider in custody proceedings.

Child Custody  - defines which parent has legal control and power over important decisions in the child’s life, where the child will live, and the visitation schedule between the parents.  Want more information?  Visit the child custody page.

Child Support  - payments made by one parent to the other for the support of a minor child.  The main factors taken into consideration when determining a child support amount are: the number of overnights each parent has with the child in question, the monthly gross income of each party, work-related child care costs, costs for healthcare coverage for the child, and any other biological children that each parent is primarily responsible for.   For more, visit the child support page.

Consent Order - an order agreed upon by the parties and filed for a judge’s signature prior to hearing of a matter by the court. A consent order has the same effect as an order made by a judge after a full trial or hearing, and is enforceable by the contempt powers of the court.  Think of a consent order as a settlement between the parties prior to trial.

Contempt - the mode of punishment used by a court to enforce their orders.  A party that does not follow the terms of a court order may be held in contempt of the order.  Contempt may be criminal or civil and the requirements and punishments for each are different.  For more, visit the page on enforcing agreements and orders.

Divorce - the process by which your marriage is legally dissolved and both parties forfeit any legal rights they had to the company or property of the other by means of their marriage.  Divorce itself is typically the simplest of matters to resolve when parties separate.  It is the ancillary matters often brought along with a divorce, including child custody, child support, equitable distribution (property division), and spousal support/alimony, that create the most legal complications and tension.  For more information, visit Prism's divorce page.

Divorce from Bed and Board - an action in which one spouse asks the court to determine that the other spouse is at fault for the ending of their marriage. Divorce from Bed and Board can be used to establish a basis (or lack thereof) for alimony or to obtain exclusive possession of the marital residence pending an equitable distribution award.  For more, visit Prim's divorce from bed and board page.

Emergency Ex Parte Custody - a method of obtaining temporary custody in extreme situations in which one party files a motion for custody and a judge makes an immediate ruling ex parte (without the other party involved).  An Emergency Ex Parte Custody motion must allege that the child for whom the filing  party is seeking emergency custody is in serious danger of physical or sexual abuse, or that the other party  has threatened to take the child out of the state of North Carolina for the purpose of evading jurisdiction of the court.  If an order is granted on an ex-parte basis, a hearing on the matter must be scheduled within 10 days during which both parties, including the non-filing party, have an opportunity to tell their side of the story.  For more, view Prism's blog on emergency child custody.

Equitable - fair to all parties involved.

Equitable Distribution - the process that North Carolina courts use to divide property between two spouses upon divorce.  In North Carolina, an equal division of property is presumed to be equitable unless evidence to the contrary is provided.  For more, visit Prism's equitable distribution  page.

Home State - a term used in child custody jurisdictional discussions.  The home state is the state in which a child has resided with a parent or a person acting as a parent for at least six months immediately prior to filing for custody.  For more, view Prism's blog discussing jurisdiction in child custody disputes.

Interim Distribution – a preliminary distribution of a portion of property between divorcing spouses completed prior to the time that a full equitable distribution takes place. An interim distribution order may include various provisions, including those related to the safekeeping of certain property, and may dictate which spouse is to maintain possession of the marital residence pending a final distribution.

Jurisdiction - the power of a court to hear and make decisions on a legal dispute given the location of the parties, witnesses, and subject matter involved.

Modification - an action to change, replace, supersede, or otherwise update an existing court order based on a change in circumstances relating to the parties or the subject matter of the order.

Premarital Agreement - an agreement between spouses-to-be which dictates how all issues incident to divorce should be handled and disposed of in the event the parties are to separate at some time in the future. A premarital agreement can address all the same issues as a separation agreement, but it must be executed prior to marriage.  For more, visit Prism's prenuptial agreement page.

Physical Custody - custody is typically broken down into physical and legal custody.  Physical custody relates the actual care, control, and supervision of the child involved.

Separation Agreement - an agreement between spouses after they’ve become separated which dictates how all or some issues incident to divorce should be handled and disposed of. A separation agreement typically contains provisions including (but not limited to) post-separation support, alimony, equitable distribution, child custody and child support. For more, visit Prism's page on separation agreements.

Service and Process- the method and process by which certain legal complaints and notices must be “served” upon the opposing party.  The type of service and process depends on the type of action involved and whether or not the filing is an initial filing or subsequent filing in a matter.  Service and process for family law, divorce, and other civil matters are generally governed by Rules 4 and 5 of the North Carolina Rules of Civil Procedure.

Supervised Visitation - visits between a child and parent that are supervised by some third party. The third party may be the other parent, a trusted family member, or a paid supervisor.

Temporary Parenting Arrangement (TPA) - a temporary order of the court defining a child’s custody and visitation schedule and decision making authority between the parents.  A TPA is used to bridge the gap between filing of suit and an actual permanent custody determination…the idea being to get the parties into court quicker for a brief hearing.  A TPA is only appropriate in somewhat extreme situations, such as when there is repeated snatching of a child between the parties or when one party is denying the other party access to their child. For more, visit Prism's discussion on temporary parenting arrangements blog

U.C.C.J.E.A. – the Uniform Child Custody and Jurisdictional Enforcement Act; these laws have been adopted by almost every state in the United States.  The act governs the determination, enforcement and modification of interstate child custody disputes when there is a question as to which state has proper jurisdiction.  For more, view Prism's blog on jurisdiction in child custody disputes.

Visitation - a routine schedule of visits between a child and the non-custodial parent in a child custody arrangement.

Need help?  Our family law attorney is available to help with all family law and divorce related matters in Mecklenburg and Cabarrus counties in North Carolina.  To speak to an attorney, call 704-412-1442, or complete the contact form above on this page and an attorney will contact you. 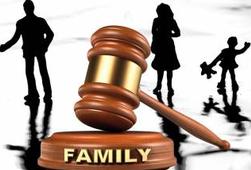 Call today to speak with a Charlotte family law attorney OR click below to visit Prism's contact page.